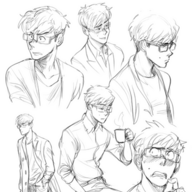 It was 1:03 AM exactly, and Arthur was the only person alive.

At least, that's what it felt like. Whenever he was able to make the hike up to the national park, the feeling of isolation from the rest of civilization was captivating. The night sky was actually visible around this area, and he found himself enthralled with the blanket of stars enveloping the stretched horizon.

He had with him the usual accoutrements: A thermos, a sketchbook, pencils, map, flashlight, and portable charger. The last item might not have been necessary, but after an occasion where the cold weather had decimated his phone battery he felt it was better safe than sorry. With an appreciative gulp of night air, Arthur began making his way through the park, enjoying his solitude.

He enjoyed it for all of ten minutes.

Further back from him, he could hear the sound of a crack. It was faint, something small, but unmistakable in the silent night. Arthur's hand lowered toward the pocket of his coat, reaching slowly for the final item he always brought with him: A pocket blade, kept typically for his own security, and ready to be used if needed.

He turned slowly, trying to get a glimpse of whatever had caused the noise. 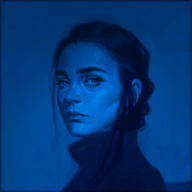 Camping was not fun. Or at least, that's how Melody felt about the whole ordeal. There were mosquitos, weird insects, venomous snakes, spiders, bears, mountain lions, and worst of all--hipsters. If she wanted to be surrounded by trees, then it would be in a nice little fully-equipped cabin that's been devoid of living creatures other than people and maybe a dog. Glamping was definitely more her style.

To make matters worse, she had gotten lost. Dissociating on a late night hike because you couldn't stand hearing your two friends making out in the tent and pretending like you wouldn't notice was unfortunately on brand for the woman. In one hand she had her phone, the light of screen illuminated her face in the night. There was no signal, but she could at least look at something. In the other hand, a half-empty bottle of beer and certainly just one of many tonight.

She stumbled through the brush and tried to make her way towards a clearing, which she hadn't realized was part of a trail. A rock caught her foot--or maybe her foot caught it--and Melody nearly tumbled out of the brush, snapping through branches and leaves and out into the path of someone. She froze in place with the gait one might expect from one of those shitty bigfoot photos.

Unsure on if she was afraid or embarrassed, Melody stayed that way for an uncomfortable number of seconds before she finally broke the silence. 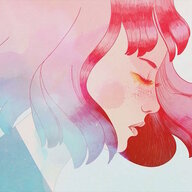 Arthur's entire body exhaled as he saw just a normal woman, awkward as he was. It was funny sometimes, to think that he was a member of a species considered to be apex predators among humanity. Yet he was set off by the snapping of a twig.

He couldn't let his relief completely take him over, though. At least it wasn't a wild animal, but he didn't know this person's intentions, and only certain types of people would be out this late. He could attest well to that.

"Uh-- Hey there." He waved back toward her, trying to gauge reactions. "Sorry. You uh-- You wigged me out a bit there. I didn't expect others to be out this late." And that was true. He really hadn't. He almost felt naked. "I'm uh-- I'm Arthur."

He seemed harmless enough, but she wasn't about to let her guard down. "I could say the same you know." She replied. "And um... I'm Mel," she offered up her name.

Likewise, she did not expect anyone else to be out here at night though she didn't really expect anything at all. She looked down to the bottle held in her hand, and brought it up to her lips and took a final sip. A few seconds passed as the skunky booze slipped down her throat. Upon finishing, she brought the bottle back down to her side and looked at Arthur.

"Say... You don't happen to have anymore alcohol wherever you're camping?" She assumed he must've been camping at least. It was only then that Mel realized she was hardly dressed for the wilderness. Wearing only a pair of gym shorts and a loose-fitting tank top for sleep. The idea of her being out here, bottle in hand, dressed the way she was, caused her to suddenly flush with embarrassment.

In an attempt to break the ice, she kept the conversation rolling. "What brings you out here anyway, Arthur?"

Arthur had smiled politely and nodded when the woman, Mel, had introduced herself to him. However, he hadn't said anything when she'd asked him if he had alcohol where he was camping. She seemed to remember something, then asked him something else anyway. He recited his prepared response, the one he'd often give when put into odd situations like this:

"Ah, no booze, sorry." He gave an awkward smile. "I'm not camping though. I've got a pretty bad sleeping disorder and I find myself up and awake most nights. But here--" He gestured to the nature around them, "-- Is a capital place for late night walks and some sketching! I-If, you know... you aren't as worried about wild animals."

He gave an awkward clear of his throat. "Are you... you know, camping or something?"

Thankfully--from Melody's perspective at least--he seemed awkward, which made the situation feel far more pleasant than the alternatives of finding a strange man out on a hiking trail at night. Of all the things, insomnia was something she understood very well. She offered him a smile of her own, albeit a rather phony one.

No booze? Oh well, she wasn't about to get sad over it.

"Yeah," she began to answer his question, "my friends and I have a tent not far through those trees." They had setup in an open little spot just off the trail Arthur had been walking. "So did you drive all the way out here to go on a night hike, or do you happen to live near the national park?" She asked.

Melody didn't remember passing many homes on the way up, but she was sure there were a few families that must've had some land nearby. Of course, she wondered if that made him loaded should he have said yes.

"Oh!" He nodded his head at her camping explanation. "Do-- I-I'm sorry this is going to sound nosy. Do you all have a campsite near other people...? Or are you on your own?" He paused, realizing the implications of what he was asking her. He began waving his arms in front of him. "I-I'm not a serial killer! I promise! I'm just concerned. I-I just... drive up here to be alone and sketch. I live downtown." He paused again, then quickly added. "I won't ask where you live."

It was weird. He was weird... but so was she. It made gauging this entire situation more difficult than she might've otherwise expected, but then again between the booze, insomnia, and her friends' make out session this might've been a relief. So she decided to keep chewing, even if very slowly to make sure there weren't any seeds.

"Yeah," she answered. "My friends..." Mel didn't want to explain any further than that. "And you know, if you're trying not to pass as a serial killer, even bringing it up isn't the greatest start... but I'm sure you're harmless," she smiled. He really did seem harmless enough, she thought.

"I don't live far from you," she answered the question he didn't ask.

Melody took a deep breath and a few steps closer, if not to feel so awkward having a conversation with a stranger in the dark. "You're an artist, or is it just a hobby?" She asked about his sketches, and even peered a little to see if she caught any artistic supplies on him.

Arthur had begun to visibly relax. Despite how unaccustomed he was to flights of random conversation, the woman hadn't run screaming from him yet. This was probably a good sign.

A little voice in the back of his head reminded him that he hadn't had fresh blood since the last time the clinic had been overrun with donations. He squished the thought without mercy. That is, he tried to.

She stepped closer, asking about his artwork. Arthur was... well... a little wary of oddly friendly strangers to say the least after a run-in at a bar a little under a week ago. Nevertheless, his better nature relented. After all, he loved an excuse to talk about what he loved.

"Oh well-- Yes! No, yes. I ah-- I'm a cartoonist." He bobbed his head, a large grin spreading across it. "Freelance-- that is. I-It's not a full-time gig, but--" He began to fumble for his knapsack, pulling out a black spiral sketchbook. "But darnit, you've gotta keep those skills sharp. I haven't really had good work since the sev-- s... since the severance of my old career, but uhm... oh-- I always wanted to be like Hergé, you know? See, he-- one moment--" He tugged an old, loose-leaf page from within the book. "He had this-- well-- his artwork has this way to it, you see. The backgrounds! The art of the backgrounds and the environments are detailed. Very realistic. But the characters themselves a-are simplistic, because a reader can more easily insert themselves into the place of characters with more simple designs. So really, he was giving the readers a way to insert themselves into the adventure! ... At least I think so, anyway..."

The way Arthur fumbled to show off his work couldn't help but get a small chuckle out of Mel. Her guard had now all but disappeared, and in a sense she found herself more comfortable with this awkward cartoonist than she had with her friends back in the tent.

"You must really admire the back of cereal boxes," she jested. She was no less familiar with tintin than anyone else her age, Mel suspected. Though she had yet to meet someone who had the same fascination for it in adulthood as they might've had as a child. It not only piqued her interest, but made her want to engage further.

Though the question of what she did gave pause because she now realized her answer was not going to be as interesting or cause happy stumbling. "I'm unemployed," she replied. "I mostly lay in bed, walk around the city, and go to bars or attend social gatherings. Tonight that happened to be camping." She elaborated.
You must log in or register to reply here.
Share:
Facebook Twitter Reddit Pinterest Tumblr WhatsApp Email Share Link
Top Bottom