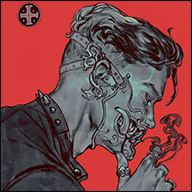 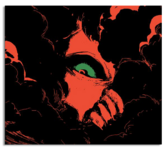 Grounded: Nine must be surrounded by their Herd during the daysleep, which is made up of humans whom he determines to be significantly divergent from the rest of society.
Covetousness: Nine is obsessed with divergent individuals, and will seek out people whose lives, quirks, or characteristics are provocative. Once they discover such an individual, it is their sole desire to claim them as part of his Herd.

Nine's appearance is as ambiguous as their thoughts. He seldom shows his face, preferring to wear a hood at at almost all times. His true face is young and masculine, though most notably are the well-defined fangs and tusks that protrude from his mouth and jaw. In his Zulo form, Nine grows nearly half his mass and height in size, and possesses a demonic form with massive, chitinous horns and equally intimidating claws. 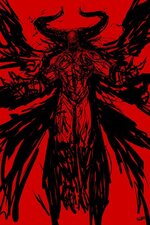 Dark Prodigy: Nine is considered prodigious for their generation, rivalling that of 8th generation Tzimisce's in the maturity of his power and disciplines, and showing no signs of slowing down.

Zulo Master: In his Zulo form, Nine is a masterful warrior capable of contending with powerful foes be they Lupine or a fellow Cainite.

Eternal Madness: To the uninformed Cainite or vampire aficionado, Nine may appear more Malkavian in his bouts of madness and unusual mannerisms, often overcoming reason and sensibility--even by Tzimisce standards.

Beast Bound: Although gifted in the violence, torture, and brutality of the Tzimisce clan, Nine maintains an uncomfortably close relationship with his inner beast. When engaged in a Frenzy, Nine not only threatens to break the masquerade, but be forever lost in the Wassail.

Nine's life before his embrace is lost somewhere within the dusk that clouds his thoughts. He cannot remember a time before, nor does he desire to. He is the Ninth Chain, and until obliteration comes, he will be nothing else. Belonging to an enigmatic Sabbat pack known as The Chains, Nine was embraced by its Ductus--a woman known simply as One. Those who belong to The Chains have since discarded their names, and are forbidden to speak directly of their life before their embrace. They have found fidelity in this uncomplicated sense of self, and prefer to show their devotions to one another through physical acts, the nature of which is left up to each individual member. Torture, sex, desecration, and even theft has been the instrument of Nine's devotion to One and the other Chains.

As the Ninth Chain, Nine is the final addition to the pack and considered by One to be her protégé. Guided by her hand, Nine surmounted all expectations and swiftly became the chief instrument of her will, and earned the devotion and loyalty of the Chains that came before him. For decades he continued to master the arts of his clan and gained immense power, but as quickly as he grew so did the insatiable nature of his bloodlust--as well as the instability of his own mind. Although wary of how little willingness Nine has to control The Beast within, One has not given up on her belief that he may yet become a wieldable weapon.

Overtime, Nine became obsessed with humans that any other Tzimisce would easily disregard. In particular, Nine found a fixation on those seen as divergent or even outcasts in human society. People as extreme as serial killers, to eccentric creatives, hermits, and spiritualists are all individuals that Nine may seek to acquire. Those who have successfully been claimed by Nine, are often added to his Herd, whom he calls his Marionettes. Thus when not otherwise engaged in One's biddings, Nine is most often found stalking Santa Noche in search of his latest Marionette.
You must log in or register to reply here.
Share:
Facebook Twitter Reddit Pinterest Tumblr WhatsApp Email Share Link
Top Bottom